To ensure you're up-to-date on all Samudera news, we invite you to sign up for our email subscription service and we'll deliver Samudera news releases directly to your email address. 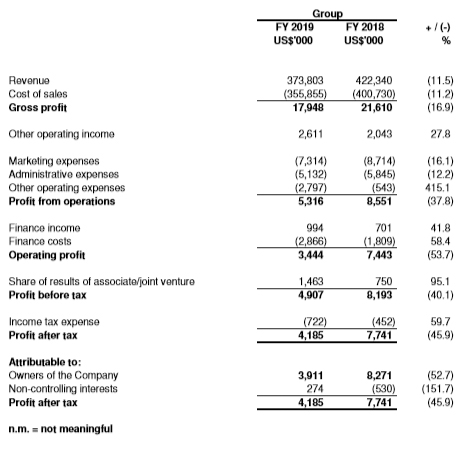 Statement of Comprehensive Income for the period ended 31 December 2019 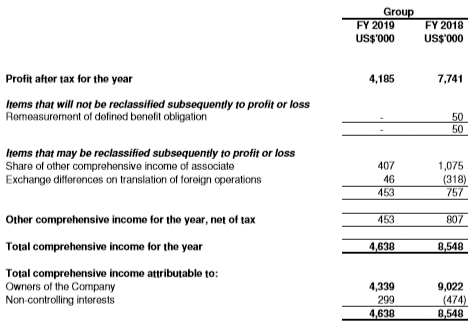 Revenue from the container shipping segment decreased 9.6% to USD353.5 million, compared to USD390.9 million a year ago, amid lower trade activity in the region. Container volume handled declined to 1.2 million TEUs in FY19, from 1.4 million TEUs in FY18.

Revenue from the bulk and tanker segment fell 58.6% to USD9.2 million in FY19, from USD22.1 million in the preceding year. This comes as the Group had reduced its fleet size during the year following the disposal of one tanker and two bulk carriers that were not contributing positively to earnings.

In line with the lower business activity in both business segments, cost of services fell 11.2% to USD355.9 million in FY19, from USD400.7 million in FY18. Consequently, the Group recorded lower gross profit of USD17.9 million, compared to USD21.6 million in a year ago.

Other operating expenses rose to USD2.8 million in FY19, from USD0.5 million a year ago. These were mainly due to a USD2.0 million impairment on two chemical tankers after taking into consideration the declining trend in charter rates over the near-to medium-term. The increase also took into account of the impairment losses following the reclassification of an Indonesia-flagged container vessel from property, plant and equipment to asset held for sale, and in relation to a bulk carrier prior to its divestment.

The Group recorded a higher share of results mainly from its 25%-owned associate company of USD1.5 million, compared to USD0.8 million in the preceding year. The associate company is involved in the shipping of liquefied natural gas in Indonesia. 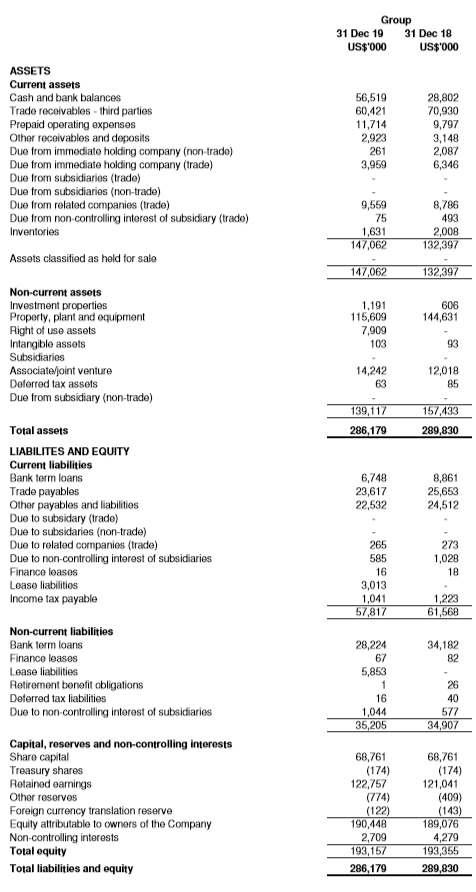 Commentary On Next 12 months prospects

Operating conditions of the container shipping industry are expected to remain challenging. The US-China trade conflict remains a significant risk to international trade flow. In addition, the Covid-19 outbreak is expected to have an extensive adverse effect on economic activities including manufacturing and logistics, which in turn will affect the demand and movement of goods between countries.

Maritime regulations requiring the use of higher-priced low-sulphur fuel will lead to higher operating costs. In light of this, the Group is stepping up effort to implement bunker surcharge to mitigate the impact of the increase in cost.

As part its fleet rejuvenation programme, the Group is looking to replace some older container vessels in its fleet with newer, more efficient ones that come installed with scrubbers in compliance with IMO2020.

In line with the Group's effort to expand its container business revenue stream, the Group has also expanded its capabilities in the transportation of specialised cargo in 2019. In addition to reefer and out-of-gauge containers, the Group has begun ISO tank container handling services.

The Group has exited the loss-making regional dry bulk sector and will seek to focus its position in the Indonesia domestic dry bulk sector, which is expected to yield better returns. Meanwhile, its tanker business remains stable.

The Group's 51%-owned warehouse joint venture in Port Klang, Malaysia, has begun to contribute positively. The Group is currently on the lookout for opportunities to invest in Southeast Asia that are complementary to its current logistics services.